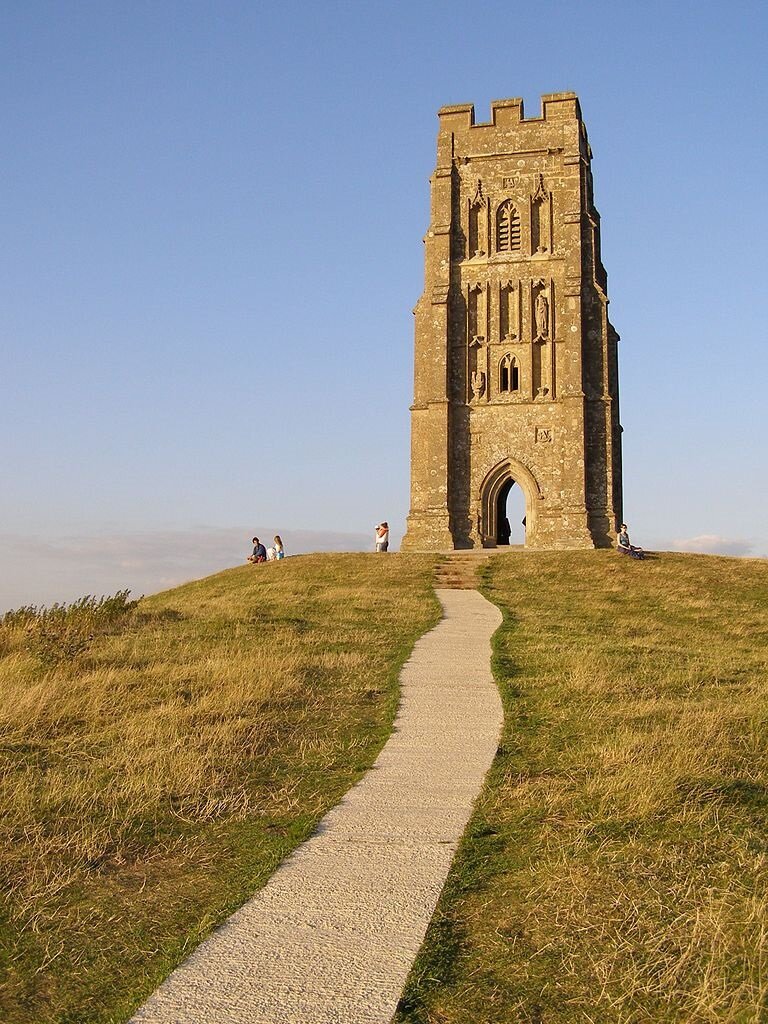 For the pilgrim the landscape of Avalon is a treasure trove where sacred sites abound. The most obvious to the visitor is Glastonbury Tor which can be seen from a great distance rising enigmatically above the flat Summerland meadows. It's no ordinary hill: people develop personal, profound relationships with it. It has been recognised as a holy hill for millennia

There are many myths and legends associated with the Tor – it is the home of Gwyn ap Nudd, the Lord of the Underworld and King of the Fairies, and a place where the fairy folk live. In early-medieval times there was a small monks' retreat on top of the Tor, founded probably in the time of St Patrick in the mid-400s. This was followed in the early 1100s by a chapel, St Michael de Torre. This was destroyed in a powerful earthquake in 1275 and rebuilt in the early 1300s. The tower is all that remains today.

In recent years there has been discussion about the significance of the terracing of the Tor. It was proposed first by Geoffrey Russell and then expanded on by Geoffrey Ashe, the well-known Arthurian scholar, that the terracing on the slopes of Glastonbury Tor is the remains of a great three-dimensional neolithic labyrinth, a ceremonial way dedicated to the ancient British Goddess. Whether it will ever be proved that the labyrinth was constructed in the Neolithic era or not is a matter for future archaeology, but since it was first suggested many thousands of people have walked it in a sacred manner. And this is no mean feat since it takes from 4-6 hours and some physical exertion and inner focus to walk in and out of the labyrinth. It provides the perfect setting for a present day ceremonial journey, whether it was so or not in the past. If the terraces were not built as a labyrinth, it does seem to have been built for ceremonial, sacred or geomantic reasons.

The only remaining reason, agricultural terracing, makes little realistic sense, even though the National Trust and many archaeologists continue to believe it – Avalon had well enough land and sunny slopes for special crops such as grapes, and the terraces stretch around the sunless and at times very exposed side of the Tor, hardly suggesting farming use.

The Tor is now owned and cared for by the National Trust and there is free access to the public at all times.

The affordable option for families seeking fun and entertainment

Lounge in luxury in some excellent locations around the county

Five Star or No Frills - there are sites to suit everyone

Explore the South West from these carefully chosen bed and breakfasts

Independent traveller? Youth Hostels enable you to explore on a budget

A SouthWest in Focus brand